CPMR SEMINAR ON CIRCULAR ECONOMY AND THE ROLE OF ISLAND REGIONS 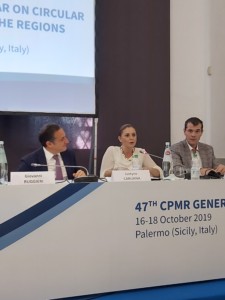 The Member Regions of the Islands Commission (IC) of the Conference of Peripheral Maritime Regions (CPMR) participated in a seminar on “Circular Economy and the Role of the Regions”, organised in the frame of the 47th CPMR General Assembly taking place in Palermo.

The seminar was hosted by the Region of Sicily and gathered around 80 delegates from CPMR regional authorities from North to South across Europe as well as representatives of associations, universities, private sector actors and European Institutions. The objective of the seminar was to pool the experiences of its 6 CPMR Geographical Commissions in terms of circular economy to prepare a technical document based on the results of the seminar to develop political messages.

Mr Gaetano Armao, Vice-President of the Sicilian Region and President of the Insular Regions Intergroup at the Committee of the Regions, officially opened the seminar by recalling the work led by the CoR on the 8th Environment Programme and its wish to stimulate the European Commission to take initiatives on the circular economy and the environment.

From the European Parliament, Mr François Alfonsi, MEP, voiced the situation of islands regions recalling that they face particular challenges when it comes to implementing European legislation, bearing in mind that all Regions are not identical. In particular, he emphasized the fact that islands are particularly affected by transport costs and concerned by the need for waste recovery on site. Therefore, circular economy and its concept is a very important step forward for such territories but it requires flexibility. The Directives decided in Brussels should be implemented through a place-based approach and adapted on the ground.

In addition, Mr Georges Kremlis, Honorary Director and Active Senior for circular economy and insularity, DG Environment, European Commission, urged regions to make greater use of references to the specific territories as per the Lisbon Treaty, at the time of the launch of the Green Deal by the European Commission, the renewal of the Action Plan of the Circular Economic Package, and the “Just Transition Fund”.

CPMR islands regions were thus able to share their dynamism and their deep interest in the setting-up of the circular economy on the ground :

The Minister for Gozo, Ms Justyne Carauna highlited the particular situation of islands arguing that  “To reach EU targets, islands need more flexibility and specific regulations in EU funds and state aids to take account of their specific conditions linked to insularity”. To face the challenges linked to increasing tourism, Gozo has decided to work closely with locals and to apply the principles of the circular economy model (rebuild, reuse and recycle) to the tourism sector.

Mr Jens Hjul-Nielsen, CEO, BOFA – Region of Bornholm, moderated the session dedicated to circular economy and waste management. By 2030, Bornholm will not landfill nor incinerate any waste, but will reuse and recycle 100% of all its waste. This is a challenging goal but BOFA wants to pave the way, learning and gaining experience to be used all over Europe.

Mr Alberto Pierobon, Regional Minister for Energy and services of public utility, Region of Sicily, outlined the concrete approach set up by Sicily through its recently implemented Regional Directive. It aims at giving a second life to electronic devices and also promoting plastic recycling at regional level, and it had led to the creation of new jobs in the circular economy sector.

The last session of the seminar, focusing on circular economy and energy transition, was moderated by Mr Giuseppe Sciacca, Executive Secretary of the CPMR Islands Commission, who recalled that it is a key issue for island regions. There is a need to develop advocacy activities towards the European institutions by sharing information form the ground, such as the strategies and projects implemented.

Representatives of partner organisations and experts on island issues also actively contributed to the discussions.

Mr Gianni Chianetta, Scientific Director of Greening The Islands, recalled the value of his organisation’s agreement with the CPMR and its Islands Commission to bring together private and public stakeholders in support of the green economy and to produce useful reports for policy-makers.

The session on circular economy and sustainable tourism was moderated by Mr Giovanni Ruggieri, Professor at University of Palermo and President of OTIE, who reminded the fragile situation of islands as small territories and systems which may have to deal with very large tourist population flows. He therefore emphasised the need for a global vision, not only a local vision.

In addition, Mr Christian Del Bono, Chairman, Federalberghi Minor Islands of Sicily/Eolian Islands argued that in order to implement new models in sustainable tourism there is a need for adequate competences, training and infrastructure and to enhance the support to public and private institutions. Its organisation has developed a project together with 17 chambers of Commerce in cooperation with UNESCO to raise the awareness of local communities on sustainable tourism plans.

An academic research on the obstacles to implement circular economy models in island regions of the Mediterranean was also presented by Ms Jelena Marjanovic from the University of Corsica. She introduced 2 projects that are on-track and involved local actors: the Interreg project ViviMED and the RISPETTU project launched by the Hotel sector.

Lastly, Mr Davide Strangis CPMR Executive Director, summed up the seminar by stating the discussions have shown the variety of approaches and experiences in relation circular economy across CPMR Member regions. Therefore, the involvement of local and regional stakeholders and the adaption of EU policies and measures to territorial needs are essential. Investments in this area should focus on the experimentation at territorial level.

The CPMR will exploit the discussions with a technical document on the state of the art in CPMR regions across Europe and will elaborate recommendations for advocacy activities.

More information on the event and all the presentations from the speakers are available here.