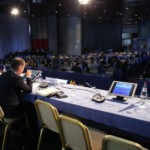 Member Regions of the CPMR Islands Commission (IC) came in force to the CPMR General Assembly, hosted this year by the Region of Madeira in Funchal (Portugal), from 17th to 19th October.

Elected representatives from island members gathered prior to the CPMR General Assembly during the plenary session of the Islands Commission, which took place on 18th October. This session was an opportunity to provide a general overview of the actions undertaken since the General Assembly in Bastia in July 2018 and to prepare upcoming activities for the months ahead, particularly in the areas of cohesion policy, transport, energy and sustainable tourism.

The President of the Islands Commission and President of the Territorial Collectivity of Corsica, Gilles Siméoni, opened the plenary session by recalling the importance of coming together to make the voice of island territories heard in Europe, in a context where negotiations determining the future of EU policies are stepping up within the European institutions, and before the European elections in 2019. He shared his concerns, given that “island situations are still not sufficiently considered by the European institutions and in the public policies implemented.”

On cohesion policy, Mr Siméoni called to reject the European Commission’s proposals to reduce by 10% the budget allocated to this policy, in particular for European territorial cooperation, and to include maritime cross-border cooperation programmes at transnational level, which would be a significant step backwards for inter-island cooperation. However, he welcomed the introduction of new possibilities for cooperation for outermost regions and in interregional innovation.

Regarding transport policy, Mr Siméoni stressed the importance of including island territories in major European transport corridors, given that “an island cannot develop economically, and even cannot live if it doesn’t have the greatest control on aviation and maritime transport.” In this respect, he called on IC members to take concerted action, notably through a Transport Task force which will be set up soon within the Islands Commission.

The aim of the meeting was also to clarify the Islands Commission’s contribution to the work of the CPMR General Assembly, in particular the Final Declaration 2018, adopted at the end of these 3 days of discussions.

Throughout the General Assembly, Islands Commission members had the opportunity to discuss with high-level speakers from European institutions on the future of key EU policies with high territorial impact, such as the post-2020 EU budget, cohesion policy or the future policy for transport and accessibility. They also delivered strong political messages on the place of islands in Europe in video interviews with journalists on the spot:

– Interview of Miguel Alburquerque, President of the Regional government of Madeira

– Interview of Gilles Simeoni, President of the Territorial Collectivity of Corsica

Further details, videos and pictures of the Islands Commission in Funchal can be seen on the event page.

The Islands Commission will meet again for its General Assembly in Corfu (Greece) on 21-22 March 2019.